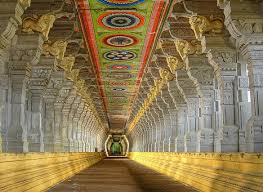 Avinashi Temple is one of the seven famous places in Konku Nadu. Avinashi means indestructible, is the name of the Lord, from whom the place get its name. Temple is facing East. The Uniqueness of this temple is that Goddess is on  the right of the Idol. The main deity is called by Avinasiappar, Avinasinathar, and Thiru Avinasiaparanar. The name of the Goddess are Perangarunai and Karunalaya Chelvi.
There are four Tirthas at this temple. The well named Kasi Ganga is inside the temple. Naga Kannigai Tirtha is outside the temple on the right. One Tirtha opposite to the temple. The river which flows opposite to the temple is called as Iravatha Tirtha. On three of the pillars are the figures of Peria Kaliyappa Gounder and his son Sinna Kaliyappa Gounder. The inscription tells us that the Mantap was erected when the scrofula on the thigh of Peria Kaliyappa Gounder’s son was cured completely.
Temple tower is not completed and only the foundation remains. The car streets are situated separately.  There are no streets around the temple.