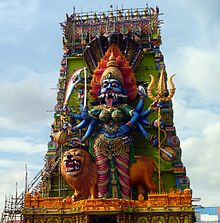 29 June , 2019 Temples
As per the Legends, Lord Vishnu took the ferocious form of Narasimha (Lion head and the human body) and killed the demon Hiranyakasyapa. Even after killing the demon, the anger was controlled and started roaming around the forests and hills causing huge damage. Devas prayed Lord Siva to control the anger of the Lord Narasimha. Lord Siva took the ferocious form of Sarabeswra with Lion face, Eagle wings, and Lion Body. Sakthi took the form of Pratyangira Devi, with Lion Head and Human body and joined with Sarabeswara in bringing Lord Narasimha to his original form.
It is said that Pandavas deposited their weapons in a tree and worshipped Goddess here. It is also said that Indrajit Son of Ravana, performed “Nigumbala Yagam”, here to attain superpower to kill Rama. Knowing this Lakshmana (Brother of Rama) and Hanuman interrupted the Yaga.