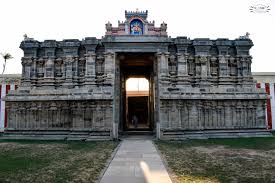 As per the Legend, During the Lord Siva and Paravati Devi Wedding, sages started gathering at Mount Kailash. Due to the mass gathering, North region went down and South region moved up. To balance the Earth, Lord Siva asked Sage Agasthya to stay at South so that it can be balanced. Sage Romasa disciple of Sage Agasthya expressed his wish to install Siva Lingas at this place. Sage Agasthya asked him to leave 9 Lotus flowers in the river Thamirabarani and install Siva Linga at the place where the Lotus touches the bank. Hence, Nine Siva Lingas were installed at Nine different Places by Sage Romasa as instructed by his master.

Due to the heavy crowd of sages at Mount Kailash attending the wedding of Lord Shiva with Mother Parvathy, Earth lost its balance. Lord Shiva called Sage Agasthya to go to Pothigai Hills in the South and to balance the Earth level as his single weight was enough for the purpose equaling the weight of the millions of Rishis at Mount Kailash then.