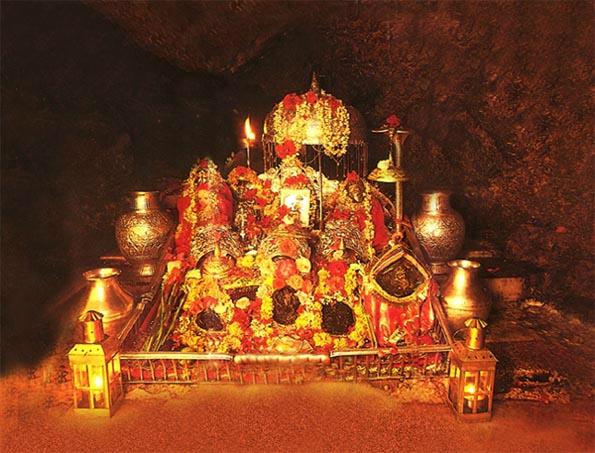 Vaishno Devi Temple History, Timings
The three Goddess Maha Lakshmi, Parvathi and Saraswathi collectively created a Sakthi and directed her to protect Dharma on this Earth. The Sakthi took birth as a girl child for Ratnakar and his wife, who were ardent devotees of the Goddesses and named the girl as Vaishnavi. As instructed by Rama, Vaishnavi built an Ashram and started meditating until she joins with Lord Vishnu in Kaliyug. MahaYogi Guru Goraksh Nath who came to know about Goddess Vaishnavi existence on the Earth visited the Ashram with his disciples and Bhairon Nath seeking blessings.
Bhairon Nath attracted to the beauty of Vaishnavi, who is carrying bow and arrows and surrounded by apes and lion. Bhairon Nath chased Vaishnavi to marry her. Vaishnavi escaped from him and reached Banganga, Charan Paduka, Adhkwari and finally reached the holy cave. Angered Goddess beheaded Bhairon, whose head fell distant apart. Bhairon realised the reason for his birth and pleaded for the guilty. Pleased Goddess blessed him with a boon that Yatra will be fulfilled after having Darshan of Bhairon. Goddess transformed herself as a rock with 3 hands.