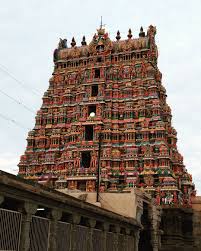 nellaiappar temple tirunelveli History
The word Nelveli has derived from Puranas that the Lord Siva safeguarded the granary from submerging in the river floods. Lord did fencing around the granary where Paddy was kept for His worship. As per the Legend, an ardent of Lord Siva, A Brahmin, Veda Sanman had spread the paddy on the floor for drying up when the floods came. It was then Lord Siva built the fence around the granary and thus protected the paddy from the river floods; hence the name Tirunelveli.
The deities of Tirunelveli are Nellaiyappar, Venuvananathar, Nelveli Nathar, Salivatisar and Veymutha Nathar. Tiruvilayadal Purana says that the Lord is called Veymuthanathar as he self-manifested himself in Bamboo.
The Goddess is called Kanthimathi Amman and Vadivudai Amman. There is a separate shrine for God and Goddess in the temple complex. The tower of the Amman was built in 1626 AD.
As per the local folklore, the Linga was established by a Muslim chieftain when his wife recovered from the illness after praying the Lord. The Linga is called by Anavarada Nathar. It is also said that the Linga worshipped by Anwar-Udin-Khan came to be known as Anavardanathan as time passes by.