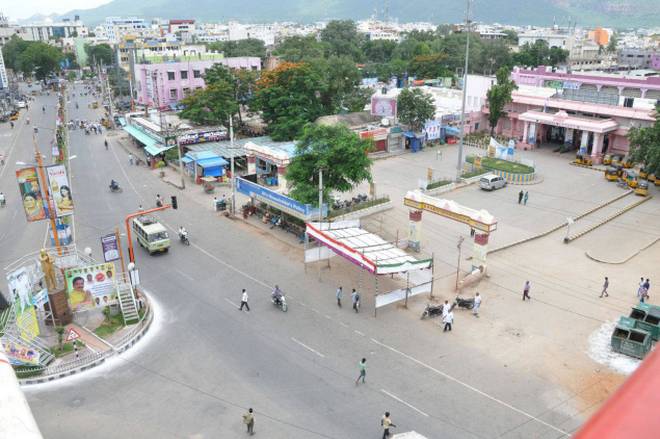 Tirupati is in Chittoor district of Andhra Pradesh, India. It is most famous for its Sri Venkateswara Temple dedicated to Vishnu, also known as Balaji in North India and Govinda in South India. The temple is on top of Tirumala hills, while the town is in the foothills. The Tirumala hill has seven peaks (“Sapthagiri”), said to represent the seven hoods of Adisesha, the serpent under whose hoods Vishnu resides in Vaikuntha.

Tirupati is in the southern part of Andhra Pradesh. Tirumala is located in the eastern ghats, a mountain range that runs along south-eastern India. The temple of Lord Venkateswara is on the seventh peak Venkatachala. The nearby town called Tiruchanoor (also known as Alamelu-Mangapuram) is covered in this page too.

Tirupati is considered a major holy city for Hinduism and receives a significant amount of pilgrimage traffic. It is referred to as the “Spiritual Capital of Andhra Pradesh”. Many attractions here are geared towards religious tourism.

Lord Venkateswara is also called the Lord of the Seven Hills. This temple has acquired a special sanctity in the Hindu religion. The benefits that accrue by a pilgrimage to this holy town is mentioned in the Vedas and Puranas. Hindus all over the world believe that in Kali Yuga it’s possible to attain mukti by worshiping Lord Venkateswara. Around 50,000 pilgrims visit the temple every day.

The Pallava, Chola, Pandya and Vijayanagar rulers were known to give funds and jewels as temple offerings.

There was no human settlement at Lower Tirupati until the year 1500. With the growing importance of Upper Tirupati, a village formed at the present day Kapilatheertham Road area and was named “kotturu”. It was later shifted to the vicinity of Govindarajaswamy Temple which was consecrated around the year 1130 CE. Later the village grew into its present-day form around Govindaraja Swamy Temple which is now the heart of the city. It has now gained a lot of popularity as a tourism place.

1.)  Tirupati Airport (TIR IATA Renigunta Airport), Renigunta Airport Road, ☎ +91 877 227 5354. This airport is a domestic airport. It is possible to get connecting flights to and from Hyderabad and Chennai airport. (updated Jan 2016 )
The nearest international airport is in Chennai.

2 Tirupati Railway Station. This is a major junction in the South Central Railways system. There are direct trains from near-by metro cities of Bangalore, Chennai, Hyderabad, and others. (updated Jan 2016 | edit)
Trains can also be boarded at nearby cities – Renigunta (10 km from Tirupati) and Gudur (100 km). Frequent bus service is available between Tirupati, Renigunta, and Gudur.

National Highway NH 205 passes through Renigunta and hence is accessible from Chennai (3-4 hr), Bangalore (at least 5 hours), Hyderabad (10-12 hours) and other nearby cities.

It is possible to go on a package tour from various places including Chennai to Tirupati, with the operator taking care of transport, accommodation, and sight-seeing.

Self Drive Car Rental in Tirupati