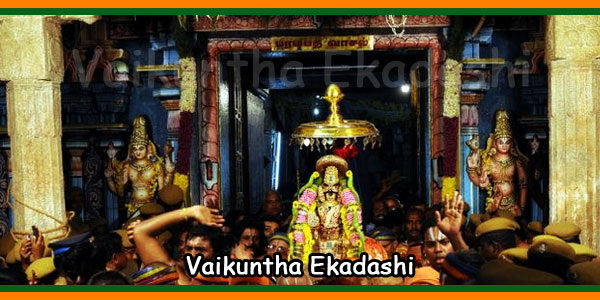 Vaikuntha Ekadashi is an important ekadashi observance that falls on the ‘ekadashi’ (11th day) of the Shukla Paksha (the waxing phase of moon) in the month of ‘Pausha’ in the Hindu calendar. This date corresponds to the months of December to January in the Gregorian calendar. The day of Vaikuntha Ekadashi is auspicious for Vaishnavism followers as it is believed that ‘Vaikuntha Dwaram’ that is the gateway to Lord Vishnu’s abode, opens up on this day. Therefore it is believed that a person who keeps a sacred fast on Vaikuntha Ekadashi will definitely reach the ‘Vaikuntha’ and never has to face Yama Raja, the Lord of Death.

Hindu devotees observe Vaikuntha Ekadashi with full enthusiasm and zeal all across the country. In the southern states of India (Tirumala), this ekadashi is often known as ‘Mukkoti Ekadashi’ and is celebrated in the month of ‘Margazhi’ in the Tamilian calendar. In Kerala, Vaikuntha Ekadashi is celebrated as ‘Swargavathil Ekadashi’. On this day special prayers, discourses, speeches and yagnas are organized at the temple of Lord Vishnu, in different parts of the world. In India, the celebrations in the temples of ‘Tirumala Venkateswar Temple’ at Tirupati, the ‘Mahalakshmi Temple’ at Gubbi , the ‘Sri Ranganathaswamy Temple’ at Srirangam and ‘Rajagopalaswamy Temple’ at Mannargudi is very renowned. The festivities are very grandeur particularly in South Indian temples that are dedicated to Lord Vishnu.

Vaikuntha Ekadashi 2019 is on March 02 Saturday