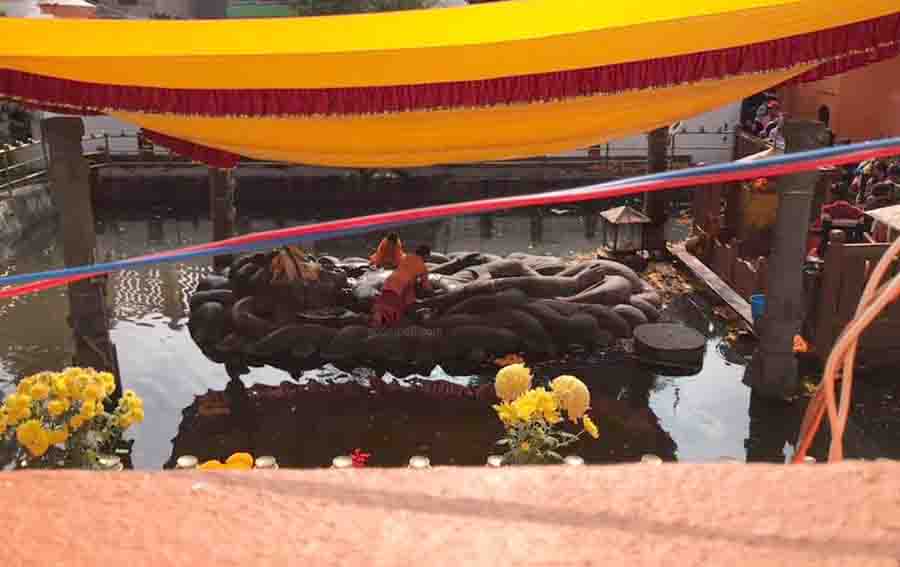 It dates back to Dwapara Yug, King Surya Ketu who used to rule Shivapuri was a devotee of Lord Vishnu. He used to worship Lord Badrinath regularly. He is getting old and not able to travel Badrinath to worship. He prayed to Lord Siva for his inability. Pleased Lord answered him that he will appear in his area itself. King requested to Vishwa Karma to sculpture an Idol. Bhima, Pandava’s brother installed the Idol. Lord appeared in his dreams that Idol is not of his and cursed King and his generations to stay away.
At the end of Dwapara Yuga when Earth filled with water, Lord Krishna sent his Sudarshan Chakra and cut the Chobhar hill so that Kathmandu will not drown. The Idol went under the Earth. The place where Idol resides is called Khaalo.

How to reach Budhanilkantha Temple?

Budhanilkantha temple, also known as the Narayanthan Temple, is situated in Kathmandu. Though the temple is named Budhanilkantha, its name does not come from the Buddha; Budhanilkantha stands instead for “Old Blue Throat”. The statue symbolizes Lord Vishnu, who is regarded as one of the ‘Trimurtis’, along with Brahma and Shiva.