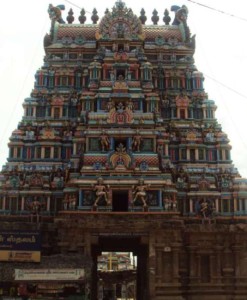 As per the Legend, Vasuki was used as the thread and Mount Meru was used as the churning stick to churning Milk Ocean. Due to rapid movement, Vasuki split the Venom into the Ocean. In the process of Amritham extraction, deadly poison came out of the ocean. Lord Siva took the poison to protect the three worlds. After the Amritham extraction, Vasuki regretted spitting Venom into the Ocean which caused inconvenience for the Lord Siva. Vasuki performed strict penance here in seeking pardon for the mistake. Impressed with the penance, Lord Siva appeared before Vasuki and stayed here on Vasuki’s request. Hence the deity called by the name Naganatha Swamy.