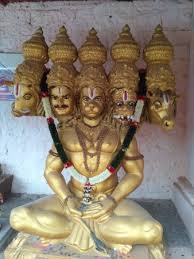 It is believed that Guru Raghavendra did penance here for Panchamukhi Anjaneya for 12 years. Impressed Lord Anjaneya appeared before Raghavendra Swamy with Panchamukha namely Varaha, Garuda, Narasimha, Hayagreeva and Anjaneya. It is after Lord Anjaneya Darshan that Sri Raghavendra entered Jeeva Samadhi.
It is said that Kolhapur Mahalakshmi, Lord Venkateswara, Lord Vishnu in Kurmavathar offered darshan to Sri Guru Raghavendra.
As per the Legend, during Tretayuga, Anjaneya visited this place while rescuing Rama and Lakshmana from Mahiravana. It is believed that Anjaneya entered the cave near Erukalamba temple to reach Mahiravana. There is a foot impression of Lord Hanuman outside the temple.
Temple will be crowded on special days such as Hanuman Jayanthi, Tuesdays, Sundays, No moon day and Pournami day. The huge rock structures near to the temple were used by Lord Anjaneya as the Bed and Pillow during his stay.