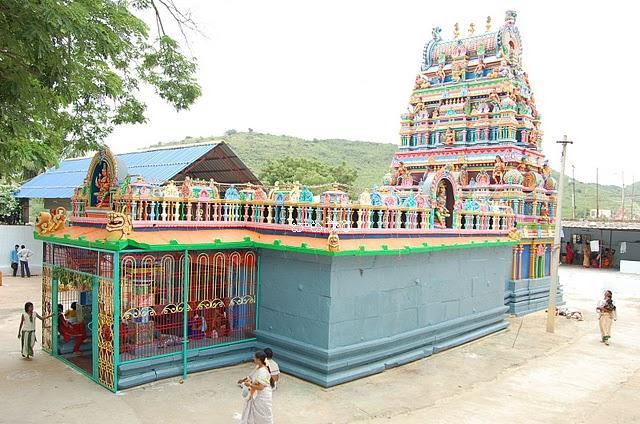 As stated in the Puranas, Tarakasura’s three sons, Vidyunnathi, Tarakakshudu, Kamalakshudu, want to take the revenge for their father death. They performed strict penance for years for the Lord Brahma. Impressed Brahma appeared before them and granted the boon with conditions set. As per the boon, each one was allotted with a city which flies in the air and they will have not threats when they are in their places. And the Condition is that their supernatural powers will weaken if three cities come closer and stay strong when they are apart. With their Supernatural powers, they conquered Heaven and The Earth. Lord Brahma with Devas approached Lord Siva for the rescue. Lord Siva demolished the cities and killed the demons when they got closer. Lord Siva self-manifested after killing the demon. Lord Siva took help from Goddess during the war with the demon and goddess self-manifested after killing the demon along with Lord Siva.
Tripurantakam is the East Gate of the Srisailam Temple. As per the Puranas, Lord Siva self-manifested here at Kumaragiri hill as Tripurantakeswara after killing the demon Tripurasura. Bala Tripura Sundari emerged from Chitagni Gundam which is North of Kumaragiri Hill, after killing the demons. As per Puranas, Goddess self-manifested at Kathambhavana. As stated in the Puranas, Kumara Swamy, The Commander-In-Chief, killed the demon Tarakasura on top of this hill.

How to Improve Your Manufacturing Business