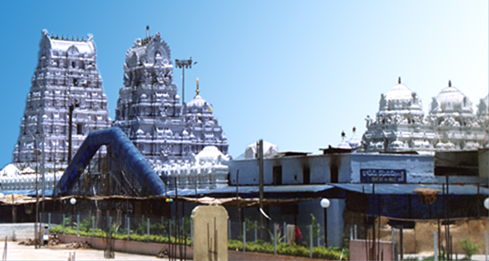 This temple is dedicated to Lord Siva and the main deity is called by the name Raja Rajeshwara who resides here with his consort Raja Rajeshwari. Lord Raja Rajeshwara and Goddess Raja Rajaeswari appeared in the dreams of Raja Narendra and instructed on the temple location who later built the temple. This temple was built during the reign of Raja Narendra and installed Lord Siva in this temple. King Raja Narendra, the Great Grandson of Arjuna, got relieved from the curse of killing Sage’s son by taking a holy dip in the temple tank, Dharmagundam.
From the inscriptions, it is known that Vemulawada Chalukyas ruled this region by making this place as the capital during 750 AD and 973 AD. This temple received huge contributions from Chalukyas.