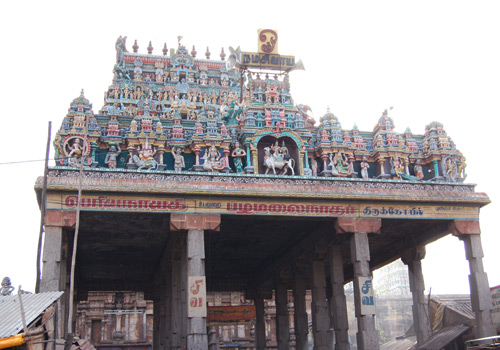 The Sthala Vruksha is the Vanni tree. As per the Legends, that this is the Kalpaka tree which came to the Earth from the Heaven to worship the Lord. The Sthala Purana give an interesting account of the place. It confirms the antiquity of the place for here it is associated with the origin of the world. Brahma first created water, it was then that Lord Vishnu killed the Madhu-Kaidapas. Their gigantic Limbs together and convert them into the Earth. Lord Siva appeared before Brahma in the form a mountain. Brahma did not understand the miracles of  Lord Siva and  started creating many mountains himself but there was no space left for them. Then Brahma realised the manifestation of Siva and worshipped the mountain and the Lord pleased with his prayers and then created the world. Then it is that Lord Siva told the mountain form he assumed was for the good of the world, it is the holiest and the first of mountains and that those who worshipped the Pazhamalai (Ancient mountain) would attain salvation.