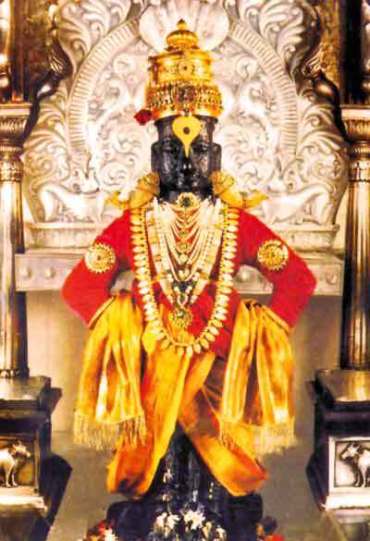 As per the Legend, The Pundarik was in early years a self-centered man given to the pursuit of pleasure. He neglected his duties towards parents, both of whom were old and ailing and bestowed all his attention on his attractive wife. One day his parents asked Pundarik to take them Kashi for a pilgrimage but rejected their request who later went by foot. Sometime later Pundarik decided to go to Yatra himself. In hurry, he missed the route and reached Kukkut Ashram. Sage offered space for Pundarik and his wife to stay at Ashram for the night. In the midnight, Pundarik heard female voices. He came out to investigate and saw three ladies sprinkling water in the courtyard of the Ashram. They looked ghastly and pale. But he noticed that a change was overcoming them and when they had finally finished clearing the courtyard they were looking like some divine beings, fresh and beautiful. The three ladies revealed to Pundarik that they are called by Ganga, Yamuna and Saraswati who used to come to Kukkut’s Ashram every morning to repurify themselves. And although Pundarik was a sinful soul, he now stood absolved of his sins because of his having met them about the secret of Kukkut’s power. He had served and nursed his parents most faithfully and devoted all his life to that one aim. He had thus accumulated vast Punya. Pundarik saw the light and hastened back to his parents. He put them on horseback took them to Kashi show them round the Tirth and brought them back most respectable.
The god was pleased to the see the great change and come about in Pundarik and decided to meet him. Once while Pundarik was massaging his father’s feet, the great Sri Krishna appeared in the door of the Ashram. His arms were resting on the hips as when he as standing in front of Rukmini.His presence went unnoticed at first as Pundarik was deeply involved in his task. However, he could not long ignore the bright rays of light that emanated from the god’s body. He turned back to see what was happening and found to his great delight that at last god had come to meet him. But god has to wait till Pandarik’s duty was over and hence Pandarik threw a brick that was lying nearby as an Asana to the divine guest. The brick still forms the Asana of the god. When his father was asleep Pandarik got up to welcome the god who offered any boon the might care to ask for. Pandarik asked for nothing more and nothing less than the eternal presence of the god at the spot where he was standing. And thus there he is, the Vittal or Vishnu or Krishna still standing on the brick Pandarik had offered him