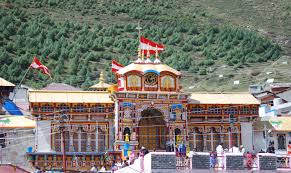 As per the legend, While Lord Vishnu performing Seva to the Goddess Lakshmi, Sage Narada compared His doings with the humans. Disturbed Lord Vishnu sent his wife Lakshmi to Pathala Loka. Lord Vishnu came down to the Earth. Lord Siva and Goddess Parvati found the boy crying at their doorstep. Lord Siva and Parvati took the boy inside the home. While going out, Goddess Parvati asked the boy to stay inside the home. The boy then locked the doors from inside and made the stay as his abode. On seeing this, Lord Siva and Goddess Parvati moved to Kedarnath for the stay. Goddess Lakshmi took the form of a Badari tree to protect Lord Vishnu, who was in penance. Hence the name Badarinath, later called by Badrinath as time passes by.
The temple located at an altitude of 3133 mt above the sea level and was built in 8th century AD.
It is believed that Lord Krishna and Arjuna stayed here for some time during Vanavasa period. This is the place where the Hanuman tested Bhima’s strength and crushed the ego. It is one of the temples of Chardham.