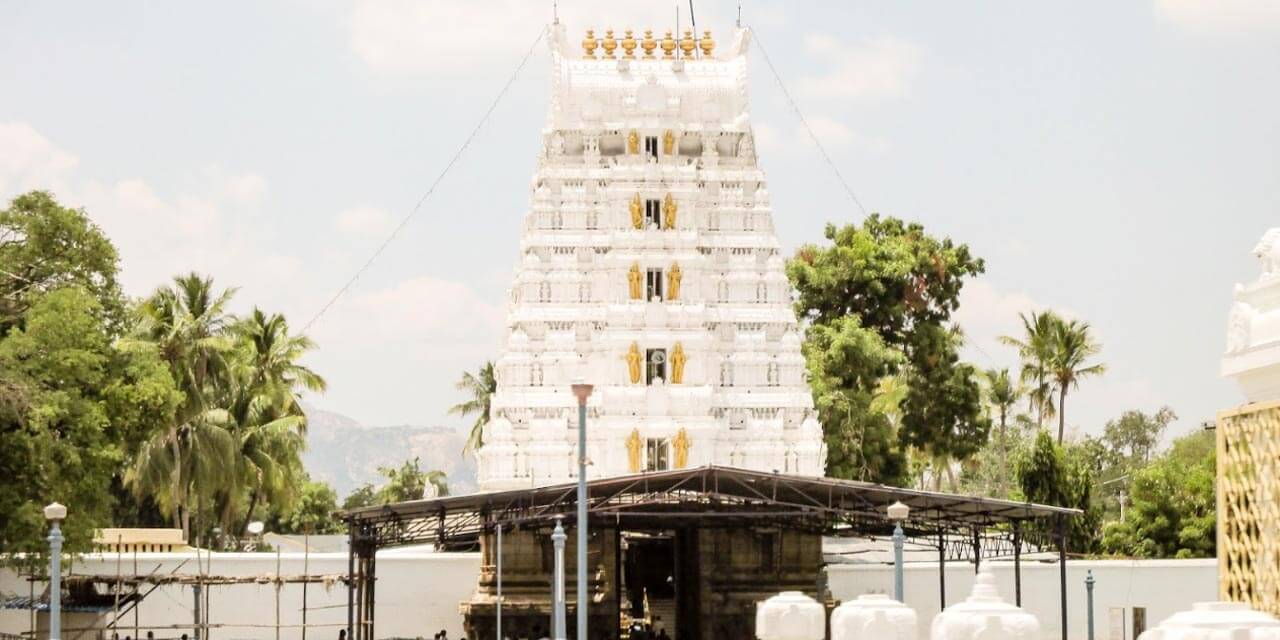 The story goes that after Lord Venkateswara’s wedding to Padmavathi, the daughter of King Akasa Raja, He set off to go to Tirumala. But enroute, the Lord and his divine consort, stayed over at his new mother-in-law’s home. Since He stayed in Mangapuram, the village came to be called as Srinivasa Mangapuram. As He was leaving, Venkateswara stopped by to visit Sage Agasthya at his hermitage nearby. Agasthya blessed the newlyweds and then told them that there was a saying that newlyweds must not climb any hills for the first six months. He invited Venkateswara and Padmavati to stay with him for that period of time. The newlyweds decided to accept Agastya’s humble invitation and stayed at the ashram for the next six months.

After six months were over, Lord Venkateswara and Padmavati were ready to return to Tirumala. But before leaving the ashram, Venkateswara made two promises. One, was a for people who, due to some disability, would not be able to climb the hill and take His darshan at Tirumala, they could visit this temple at the base of the hill. The second was for people getting ready to enter grihastashrama (i.e. get married). Venkateswara promised that those who witnessed the Kalyanotsavam at Tirumala will always get a good spouse. With this boon, Venkateswara Swamy became known as Kalyana Venkateswara Swamy. 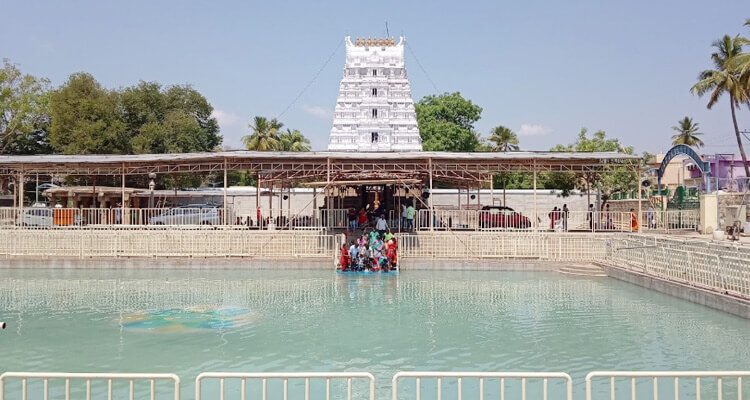 Historical reference: The ancient temple of Sri Kalyana Venkateswara Swamy was ruined in 1324, during the reign of the Sultans. The inscriptions on the temple quote that Tallapaka Chinna Tirumala Acharya, the grandson of poet-sage Annamacharya, renovated this temple during the 16th century. It was maintained by the Tallapaka family for a long time. Later, it came under the administration of Archaeological Department, Government of India. Finally, in 1967, it came under the control of TTD.

Located at distance of about 12 km towards the West Tirupati, in Srinivasa Mangapuram of the Chittoor district of Andhra Pradesh, Sri Kalyana Venkateswara Swamy Temple is another prominent shrine of Tirumala. Also known as Srinivasa Mangapuram Temple, it is maintained by Tirumala Tirupati Devasthanams (TTD) since 1967.

Considered next to only Tirupati Balaji Temple, Sri Kalyana Venkateswara Swamy Temple is considered as an alternative to those devotees who are unable to visit the Balaji Temple on the Tirumala Hills. It is also visited by many newly-wed couples who come here to seek the lord’s blessing for a happy married life. 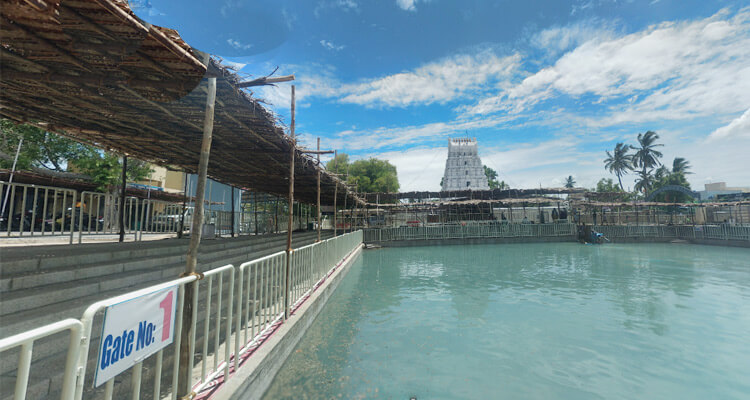 According to the mythology, Lord Venkateswara Swamy or Lord Balaji after marrying his beloved Goddess Padmavati, the daughter of King Akasa Raja, didn’t immediately return to his abode in Tirumala Hills. Instead the lord along with Goddess went to seek blessings of great saint Agasthya at his ashram. Upon request of the sage, they decided to stay at the humble ashram of the sage for a period of six months.

Pleased with his stay, Lord Venkateswara blessed the place before his return to Tirumala Hills. He blessed the place with such powers that anyone who is unable to visit the Tirumala Temple owing to various reasons such as health or age can visit the Sri Kalyana Venkateswara Swamy Temple and receive the same blessings. Along with this, even for newlyweds couples can get the boon of happy and contented life by seeking Lord’s blessings here.

It is also believed because of the boon that has been bestowed to this place by the Lord, any pilgrim who participates in the Kalyana utsavam and ties a kaappu on his/her hand, is blessed to find a loving life partner. It is also said that if the devotees are married, by strapping a kappu on their hands, they receives the blessings for contentment in their existing married life.

About the temple history, this is no substantial indication about its construction. It is believed that the ancient was ruined in 1324, during the reign of Sultans. As per the inscriptions on the temple, it is said that the grandson of Sri Annamacharya, Sri Tallapaka Chinna Tirumala Acharya had renovated this temple during 16th Century. It was maintained by the Tallapaka Family over a long period of time. Later it came under the administration of Archaeological Department, Government of India. Finally in 1967, it came under the control of TTD.

Kalyana Utsavam that occurs every day is the main attraction of this temple. According to beliefs, if a devotee seeks blessing during the Kalyana Utsavam, then he or she is blessed to find an ideal life partner. It is also believed that visiting during this time, can eliminate all kind of problems in marital life. Another ideal time to visit is during the Brahmotsavam festival, when Lord Kalyana Venkateswara Swamy climbs up on Simha Vahanam.

Sri Kalyana Venkateswara Swamy Temple timings for darshan are from 5.30 in morning till 7.30 in evening. This temple is located at a distance of about 12 km from Tirupati Bus Stand. It is easily accessible through buses as well as private vehicles. There are many frequent buses which go via Srinivasa Mangapuram to Piler, Thalkona, Mandapalle, Bhakara Peta and Ramgam Peta.